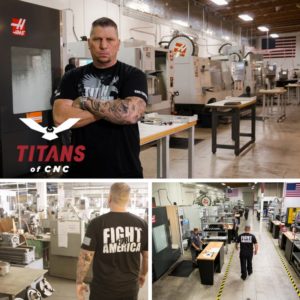 “Titan”: rooting from Greek mythology, it means a person or figure of great importance or power. Have you heard of the Titan who started a free CNC learning program called Titans of CNC?

Titan Gilroy has created a program that has handed back power to countless people. Individuals who want to thrive in the manufacturing field.

Titan grew up with a sordid past and much adversity to overcome. He experienced highs in his life, such as being a Top Ranking boxer.

He faced lows such as spending years in prison. Six months of that sentence served alone in solitary confinement.

“Let’s make the parts faster. Something made in eight minutes is now made in two minutes…that’s money you’re saving.”

After prison, he started his manufacturing career as a saw operator in a machine shop. He eventually moved up the ladder from a CNC operator to a programmer, eventually making it to being a shop supervisor.

When he eventually had to move from shop to shop, the establishments would not fully adapt to his unique ideas about CNC machining. He then pursued his own machine shop business to build his own success. 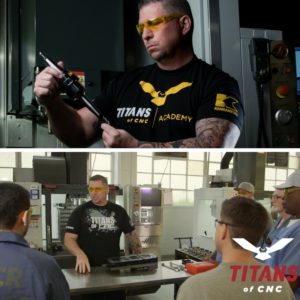 “In this trade, I have that same tenacity. That same grit. To put the work in…Look into those machines and push those limits.”

These days, Titan has many things to be proud of. He is the owner of a Northern California machine shop called Titans of CNC, which is an elite aerospace CNC shop.

He also stars in, and is the executive producer, for the TV show Titans of CNC (once known as TITAN American Built). He is also the focus of their popular YouTube channel, nearing 45k subscribers.

The TITANS of CNC: Academy is the latest pursuit that Titan is highlighting in his career. The program is a free educational platform that teaches students to harness the power of CNC machines and how to be a better CNC machinist.

“We can touch all the lives. We can impact the entire industry, right? Instead of hitting the many who could afford it.”

As you can see, we are big fans of this manufacturing maven. Everything he does is a unique solution to closing a training gap in this industry. Don’t call it a skills gap – that’s one of Titan’s pet peeves!

If your machinists are top notch and you are looking for more ways to make your CNC machines productive, contact us! Our solutions integrate with other software such as ERP, MRP, MES, CMMS, CAD/CAM. It also works with protocols such as MTConnect.