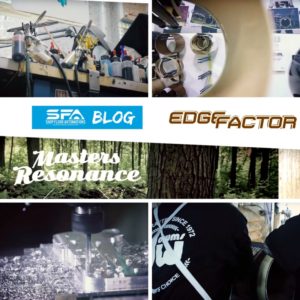 Last week, the long-awaited official trailer for documentary Masters of Resonance premiered. The film follows the path of how a quality drum set is made – from the raw material being sourced, to the concept of the product, to the making of it, to where it actually goes.

We first spoke to Jeremy Bout, Founder of Edge Factor, in February of 2017. Masters of Resonance was a big part of the conversation and was highly anticipated, even then.

“If I had to kind of pick that catalyst moment, definitely it had to be with Neil Peart, the drummer of RUSH,” Jeremy told us, about the film. “His statement was a pretty major one for me because when I started the process, I was building a TV show, and after the statement and processing what he said, I realized it was [instead] a film that needed to be completed.” Read more below!

“What Neil said to me was ‘What could be more transcendent than a musical instrument?’” Jeremy continued. “Really what that meant was that an instrument in the hand of an artist will yield a melody that’s going to become part of the DNA of the listener.”

Other than Neil Peart, other celebrity drummers are interviewed, but what stands out in the trailer are interviews with those in the manufacturing process. We see Louie Garcia, who is a Paint Shop Supervisor at DW Drums, or Shon Smith, who is the Shell Shop Supervisor, to the shop’s Drum Tuner Roland Martinez, who is essentially a quality checker. Those making the tools for the rock stars become rock stars for the work they do, which is the brilliant part of this film. There is no music without the maker.

We see shots of drums being manufactured, with many glorious, slow-mo shots of CNC machines in action, which is sure to be a hit with the machinist community. Part of an interview with John Good, the Co-Founder of DW Drums, also will hit home with those who chose a career in the manufacturing industry.

“What do you consider to be a success? Is it a doctor or a lawyer? Is it a man who wants to work with his hands?” John says in the trailer. “The joy of making things – making something from nothing. The fulfillment you get from that is second to none.”

This film will be hitting the International film festival circuit this Spring and Summer. It will also roll out on your favorite Video-on-Demand channels this Fall. Screening locations and official release dates will be announced on http://mastersofresonance.com.

To see the trailer, view it on YouTube and be sure to visit the website for the film to be kept posted on when it premieres. Check out more SFA blogs about other initiatives to close the manufacturing skills gap:

Want productivity solutions for your manufacturing operation? Call (877) 611-5825 or send us a message so we can get back to you!