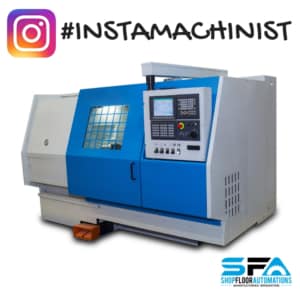 Social media is a building movement in the manufacturing field. This is especially true of the Instamachinist community.

This subculture on Instagram shares manufacturing photos and insight with each other. These men and women even share life updates and advice for non-machinist issues.

For those new to the social media world, you can find people with similar interests when it is prefaced by a hashtag (or pound sign). For example, you would look up #instamachinist if you’re in manufacturing. You would look up #cookingram if you like cooking – the list goes on.

Manufacturing is an industry where the previous generation of workers is retiring out with younger workers coming in to fill a jobs gap. This means ways of earning business are also changing.

Marketing expert and Uncopyable author Steve Miller says in relation to other industries, manufacturing is “more in the middle of the bell curve.” Steve is well acquainted with manufacturing companies – his consultation services for 32 years has included manufacturing trade shows for 26 of them.

“There are many industries far ahead, such as high tech, medical, and consumer products,” Steve says. “There are many that are slower to catch on to new marketing methods – print, home, housewares, and recreational vehicles.”

Social media has had the power to not only be a powerful marketing tool in the manufacturing field. It has also changed many lives.

Jairo, a manufacturing worker for close to 30 years from the Miami area, sounds like your everyday machinist. Except he is also known as MFCEO_Machinist, with over 14k followers and being an Instamachinist influencer since 2013.

“I started in 1990 as a helper in a tool room,” Jairo told Shop Floor Automations (SFA). Jairo said he values being an Instamachinist because “I found good information through other machinists, and I made some jobs on the side because people could actually see what I do.” 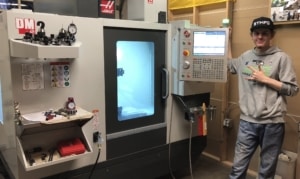 An up-and-coming influencer in the community is HEXGadgets, an 18-year-old machinist named Payton with his own Haas CNC. He spoke to SFA, an official MFG Day endorser, in-depth about his passion.

“I first learned about CNC machines completely by accident,” Payton said. He was making custom LEGO figures as a side business. He wanted to recreate specific pop culture weapons for these figures – this was how he discovered injection molding.

“All of these things took lots of time and looking back, lots of broken endmills,” Payton recalls. “It took us a little over a year to finally design and machine a working injection mold.”

While doing his LEGO customs side business, Payton excelled at math in school but wasn’t a fan of science, except for physics for its real-life applications. Still, he felt his future wasn’t moving fast enough.

“My high school had nothing in regard to machining, manufacturing or even woodworking,” Payton stated. “Most of the students there had no idea what manufacturing is.”

From ages 13 to 16, Payton taught himself machining until he could pursue a higher education experience. He credits “tens of thousands of hours” of machining related YouTube videos.

By Junior year, he opted to go to his local technical college to pursue an Associates in Machine Technology. Payton was able to use Washington State laws to his advantage – he completed a two-year Associates Degree program while earning his high school diploma at the same time.

“I got to actually enjoy going to class and learning manual machining, CNC and CAD/CAM work, instead of going to high school, which I didn’t enjoy,” the young machinist said. 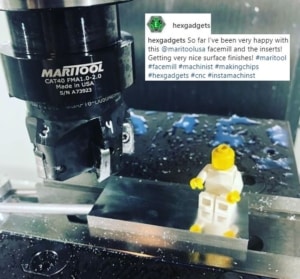 Eventually, he discovered the Instamachinist movement. “I was always on Instagram since late 2014 for the LEGO side of my company,” Payton recalls. “I figured there had to be a community for machining and making things on Instagram – turns out, there was.”

Payton’s account quickly grew by a few hundred new followers within mere months. “Social media is one of the most important things in growing any business – not just machining.”

“The amount of exposure you can get from it is insane,” Payton says, “I’ve learned a lot, met awesome people that I can now call my friends, and have made money through social media.”

Payton’s goal for the next year is to grow his business, perhaps buy another machine, and eventually, make this home shop his full-time job. If social media is a tool for machinists of any age to build their future, maybe it can fill that goal for the manufacturing industry, as well.

Want manufacturing productivity solutions? Call (877) 611-5825 or fill out a contact form to start the conversation!

Giving Tuesday What is IIoT?
Scroll to top