There are some great changes on the horizon for DataXchange from Scytec. Shop Floor Automations, an authorized reseller of the program, would like to take the time to quickly highlight previews of changes to come. 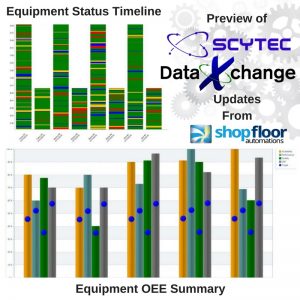 Enjoy OEE machine monitoring with a real-time shop floor layout. New OEE charts, views from a real-time dashboard, plus multiple part-time analysis reports, a shop floor layout view in the dashboard, and various equipment status comparison charts that will analyze equipment utilization across a span of different days will be included in new updates. 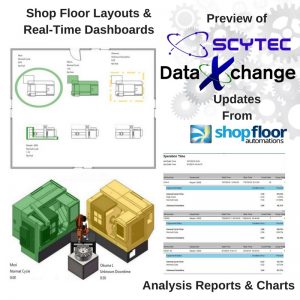 For a quick window into what you get from Scytec’s DataXchange, via the product page: 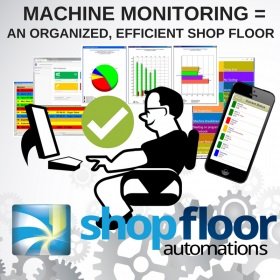 Machine Monitoring is a Must

Software can be utilized to collect and analyze machine activity data such as MTConnect, Fanuc FOCAS, plus custom macros, and the aid of certain hardware devices. An easy-to-view dashboard, as well as charts and historical reports, can help your shop floor monitor downtime, runtime, and OEE data.

As discussed in a previous blog, you can get email notifications when there are any production delays due to your machines. You can also get text messages.

These different messages can also be targeted to specific operators who work different shifts, which means one employee who is off for certain shift doesn’t have to hear about a machine that is down when employee two can handle it.

Options for machine monitoring you can take advantage of range from a convenient application, a permanent license you own, or a month-to-month license that does not require on-site servers. Be sure to call us if you want more information at (877) 611-5825, or ask us questions on social media! 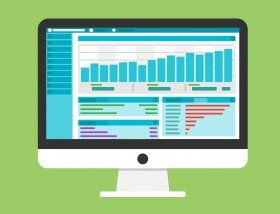 “Cloud” applications can be found virtually everywhere today, and for good reason. Join us on April 14th at 12:00 p.m. PST to learn how cloud-based machine monitoring and data collection can make predictive maintenance a reality in your operations.

The webinar will be hosted by Smartware Group, Inc., makers of Bigfoot CMMS, and Scytec, makers of DataXchange. These experts will introduce the latest technologies to monitor and collect asset data and integrate this data for actionable and results-oriented operations and maintenance management.

Get more information and register.

Tech Manufacturing, a long-time manufacturer of machined metal parts for aerospace clients such as Boeing, Lockheed Martin, and Bombardier, needed to raise production capacity and reduce lead times for their clients’ largest and most urgent orders. With their 5-axis CNC machines already running 24 hours a day up to 7 days a week, Jerry Halley, Chief Engineer at Tech Manufacturing, looked towards smarter operation and real-time performance data to increase the productivity and useful life of their existing machines.

“We needed a better understanding of how our machines were actually performing for us in real-time,” said Halley. “Live and historical machine performance data would also help us identify technical or process issues that were detrimental to productivity.” With a combination of hardware and software, a CNC monitoring system would collect, analyze, and visualize the necessary performance metrics. However, Halley needed to weigh the productivity gains of such a system against the cost and effort of deployment, especially if it involved a new and unfamiliar server-based IT infrastructure. The ideal system would be easily deployed without specialized IT equipment, knowledge, or effort, and would not require repeated software installation, updates, or configuration. 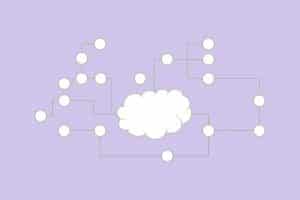 Application Requirements:
-Live dashboard with alerts based on historical and target performance metrics
-Easy to use with existing CNC machines that may not have built-in Ethernet interface
-Does not require investment or expertise in specialized IT infrastructure, servers, or software
-Knowledgeable and experienced integration and vendor support team

Solution:
Tech Manufacturing selected Shop Floor Automations, one of the most prominent systems integrators in North America specializing in CNC monitoring systems, to assist with cloud-based monitoring. Each CNC machine was connected to the existing local area network, so no additional IT infrastructure was required. For legacy machines that did not have a readily available Ethernet port, Shop Floor Automations provided an easy-to-deploy solution that was developed with Moxa. “The industrial networking units from Moxa make it easy for us to get our clients’ legacy machines connected to the cloud,” said Greg Mercurio, President of Shop Floor Automations.

“For industrial users like Tech Manufacturing, these solutions are invaluable in extending the capabilities and useful life of their still-functional but older CNC machines.” With the local network connected to the Internet, machine performance data was easily viewed and analyzed by cloud-based software such as Scytec DataXchange or Predator Machine Data Collection. Key performance metrics were organized on a visual dashboard so owners and machine operators were able to see exactly how productive each cell was, down to the machine level. Read more below.

END_OF_DOCUMENT_TOKEN_TO_BE_REPLACED

Check out this article about Cloud-Based Monitoring and how it can improve productivity. This is a powerful tool for any modern machine shop and it is important to learn how easy it is to revolutionize the way machines are being monitored.

As a manufacturer of machined metal parts for aerospace clients such as Boeing, Lockheed Martin and Bombardier, Tech Manufacturing often ran its five-axis CNC machines 24 hours a day up to seven days a week. With such heavy CNC demands, the company began looking for ways to increase its production capacity and reduce lead times for its clients’ largest and most urgent orders.

Purchasing additional machines would, of course, be one way to achieve this. But Jerry Halley, chief engineer at Tech Manufacturing, was interested in finding a smarter, more efficient approach that did not require a large capital investment.

“It was clear to me that we needed a much better understanding of how our machines were actually performing for us in real time,” Halley explains. “In addition, if we had live and historical machine performance data available, we would be able to identify any technical or process issues that were detrimental to individual or overall productivity.” Read more below.

END_OF_DOCUMENT_TOKEN_TO_BE_REPLACED

When companies such as Boeing, Lockheed Martin and Bombardier have urgent orders, how can a shop that is already running 24/7 reduce its lead time? This was the problem faced by Tech Manufacturing (Wright City, Missouri), a long-time manufacturer of machined metal parts for the aerospace industry. By introducing cloud-based monitoring from systems integrator Shop Floor Automations (La Mesa, California), Tech Manufacturing was able to pinpoint exactly where productivity issues needed to be addressed to maximize efficiency.

One way the company could have solved this problem would have been to purchase additional machines; however, Jerry Halley, chief engineer at Tech Manufacturing, was interested in finding a smarter, more efficient approach.

“It was clear to me that we needed, first and foremost, a much better understanding of how our machines were actually performing for us in real-time,” Mr. Halley says. “In addition, if we had both live and historical machine performance data available, we should be able to identify any technical or process issues that were detrimental to individual or overall productivity.” Read more below.